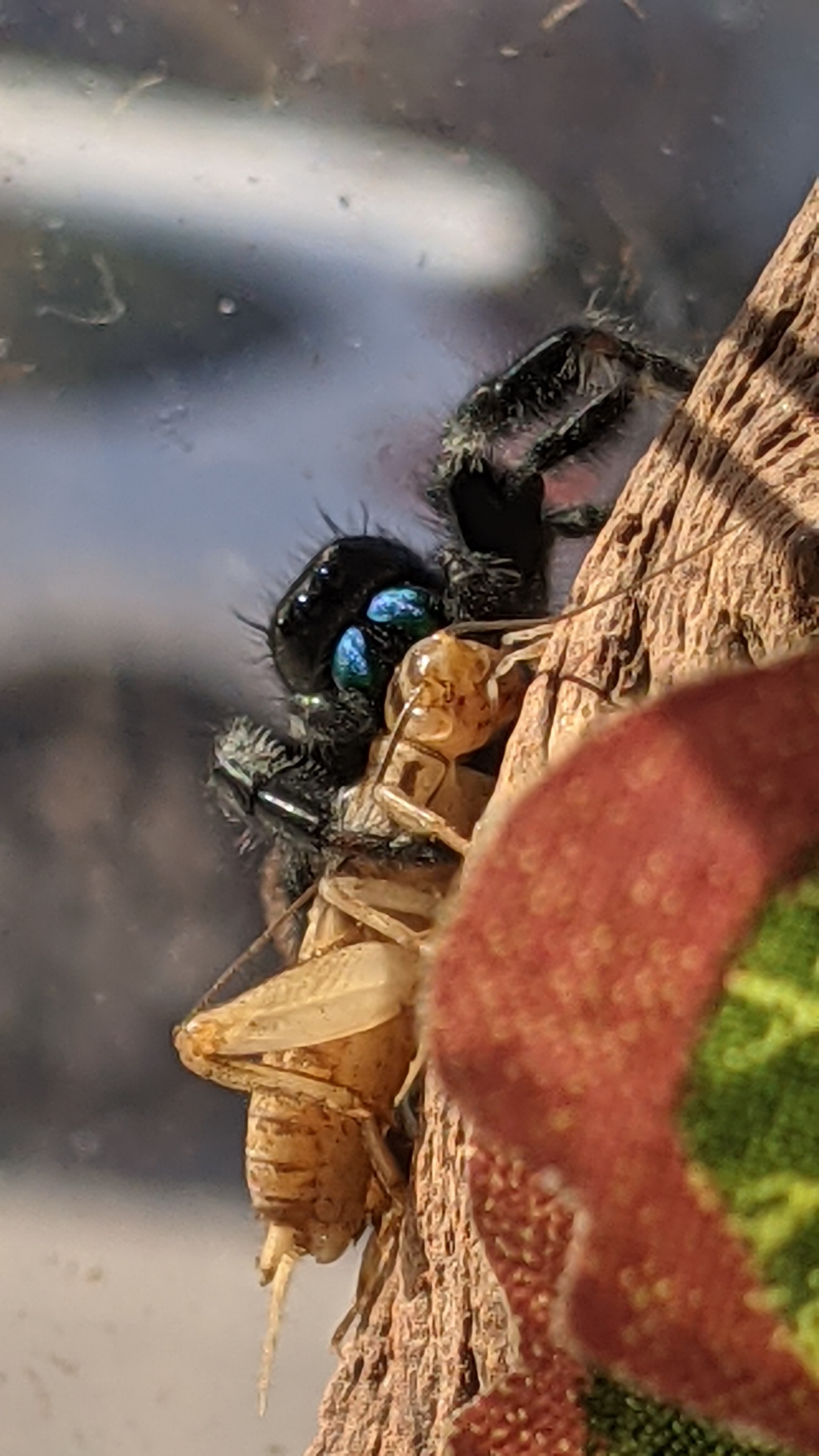 Henry is a Phidippus regius (opens new window), more commonly referred to as a regal jumping spider. I named him after a certain King Henry V.

I did a lot of research before acquiring him to ensure that I would be a good pet owner for him. I've collected most of that research here as a guide in case you're interested in becoming one, too.

After about a month of research, I bought him off of eBay. It was actually pretty hard to find a seller that I could buy one from. There were plenty of Facebook groups for owners, but the few sites I found where you could buy jumping spiders from had this particular species I was after, out of stock. 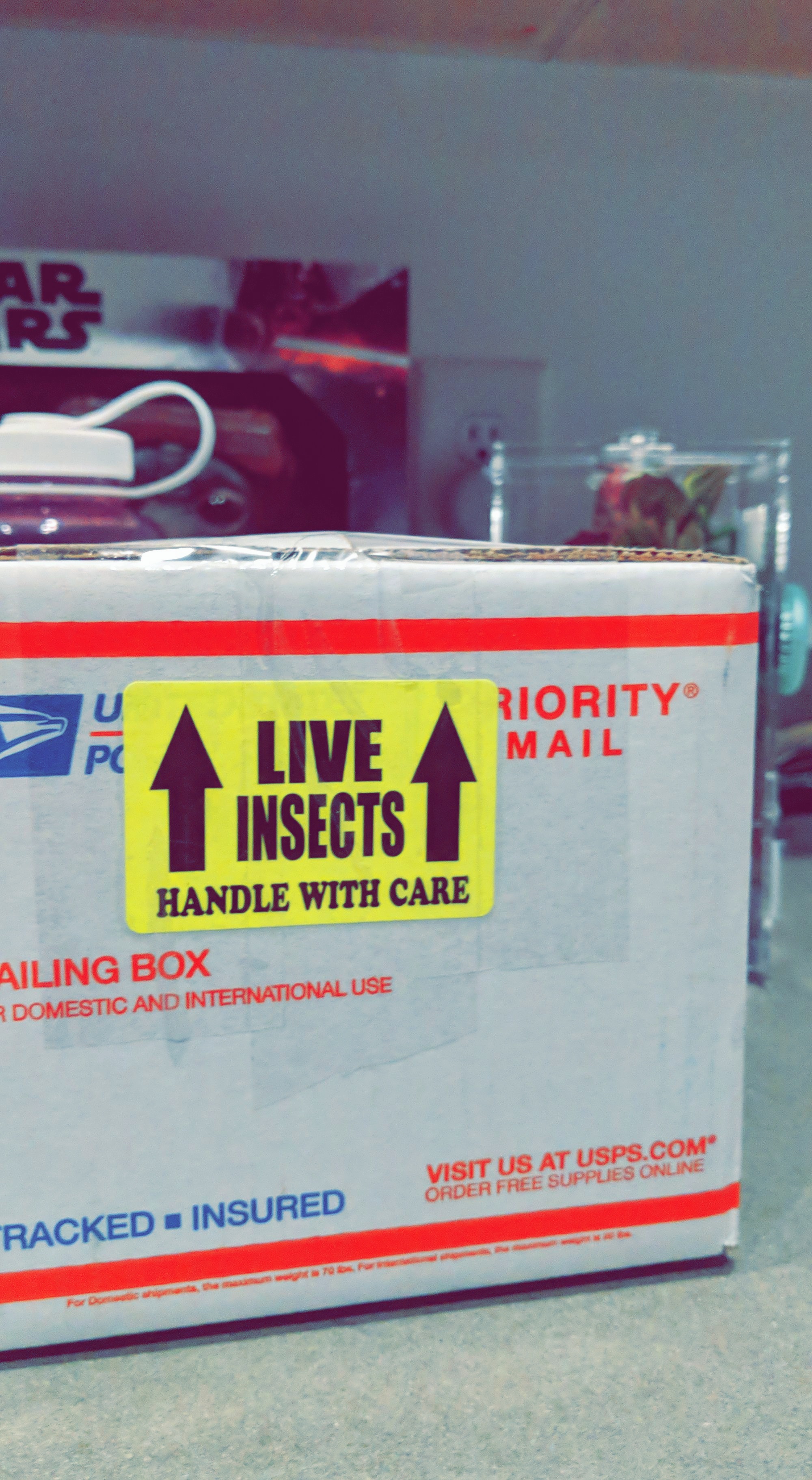 I was very excited when he arrived. I had everything set up and ready for him.

During Christmas of 2019 (opens new window), I went camping with my sister and brother, Meli and Adam, in the woods of South Carolina.

Once we had set up camp, with the sun down and the fire going, I started to notice with my headlamp a bunch of tiny water droplets on almost every blade of grass. I thought this was interesting since it wasn't particularly dewy nor had it rained recently and we weren't next to any kind of body of water.

Upon closer inspection, I realized that each of those raindrops, like tiny glistening rainbows of light, were in fact, spiders.

This was the first time in recent memory that I'd encountered something in this world that I genuinely feared. It has long been my belief that fear, apart from a reflexive survival instinct, generally stems from a misunderstanding of the unknown.

And so, with the intent at better understanding this unknown and thus conquering my fears, I began my research into spiders.

First, I began my research into what kind of spider it was that I might have encountered in the woods of South Carolina during the winter. I couldn't find exactly what kind of spiders they were (in Florida it probably would have been something like a wolf spider), so I instead began going down a different avenue of research: how intelligent are spiders? Indeed, this was at the source, my fear of spiders.

Seeing that many reflective little rainbows that night, like a sea of stars in the dark forest (opens new window), instilled fear in me because it was more like a sea of tiny intelligent minds gazing back at me. Nature's automata.

So I started going down a rabbit hole of interesting YouTube videos on the intelligence of spiders, where I invariably came across the jumping spider.

I eventually came across this (opens new window) video on how to care for a jumping spider as a pet. It was very cute and I decided right then and there that I wanted to own a one as a pet, too.

Surprisingly, I couldn't find very many terrariums fit for a jumping spider. According to my research (opens new window), jumping spiders are arboreal, which means they will appreciate an enclosure that is tall. This is because they will usually build a sac on the very top of the enclosure, which is why it's a good idea to have one with a side door.

Thankfully, Snake Discovery (opens new window) provided a link to a great enclosure that they used in the video. This was the Zilla Habitat (opens new window), which I found readily available at my local Petco.

The next morning, I found that lil Henry had, indeed, built his sac at the very top of the enclosure! Cool!

As I moved him around the apartment to get some sunshine, I found he built another sac on the wooden decoration in the enclosure. The wooden piece fit snugly inside and the soil packed around it probably dampened some of the vibrations of the case as I moved it. 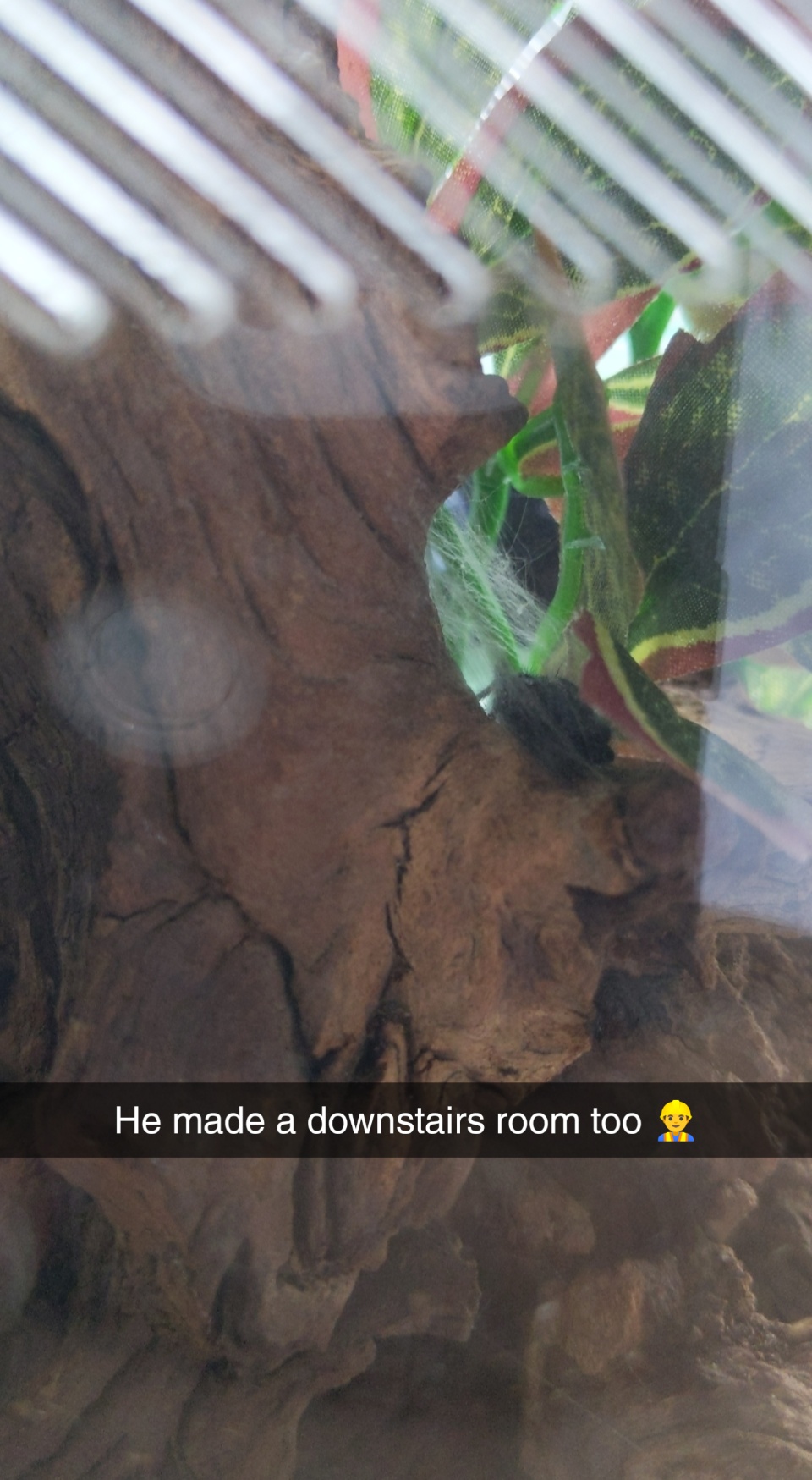 It took about a week after I ordered Henry online for him to arrive, so I couldn't know for how long it'd been since he'd last eaten since being packaged. It's generally recommended (opens new window) that you feed them every 2-3 days.

I ran back to Petco to try and find some bugs for Henry to eat and I couldn't find any live food; All the jars I examined showed nothing but dead bugs.

Luckily, there was a PetSmart nearby. There, they did have a nice section for live feed and they even had an employee stationed there. I picked up some crickets (opens new window).

I tried to feed one to Henry the first day, but he didn't seem interested in it for whatever reason. I took the cricket out of his enclosure since you're not supposed to leave live crickets in there overnight (opens new window). I put the cricket back into a big Tupperware® container that I had poked holes into, with the rest of his doomed family.

The next day, I put another cricket back in his cage and left him. I went about my business and kind of forgot about him until I checked his case again later and noticed not only had he emerged from his sac he had hidden himself away in, but he also had caught the cricket!

Man was he going to town on that bug.

I kept him on the TV to get some sunshine throughout the day, moving him into some shade if his enclosure got too hot. You aren't supposed to put them in direct sunlight. I found this (opens new window) great guide on creating the ideal conditions for your pet jumping spider to be comfortable in.

As I walked by him later, I saw him coming out of his hiding place once again to explore some more of his environment.

(This was while I was rediscovering my absolute BANGER of a playlist I'd made on Spotify back in 2018.)

I'm glad he was (literally) warming up to his new home.

As the thermometer indicated his enclosure was getting hotter, I moved him into the corner of the window to provide some shade. I also misted the side of his cage to provide him with some water droplets to drink if he wanted. I read somewhere that a good time to do so is when you feed them.

I tossed in the humidity gauge as well because it looked like it was getting too arid for him (at least on the outside of the cage). The moss in the enclosure helps to retain the humidity. 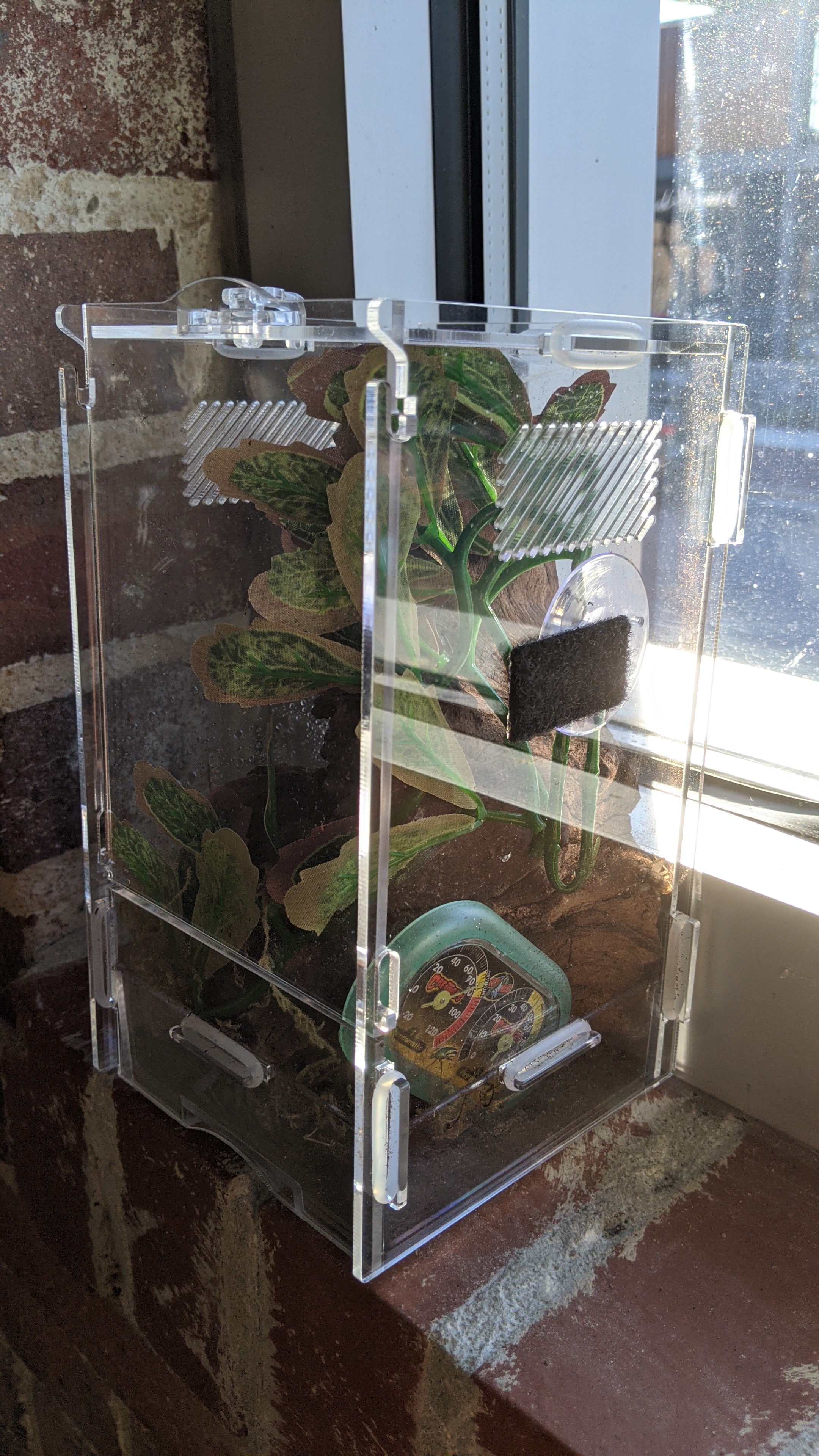 It's also important to keep him warm. Sadly, no mittens (opens new window) for him. 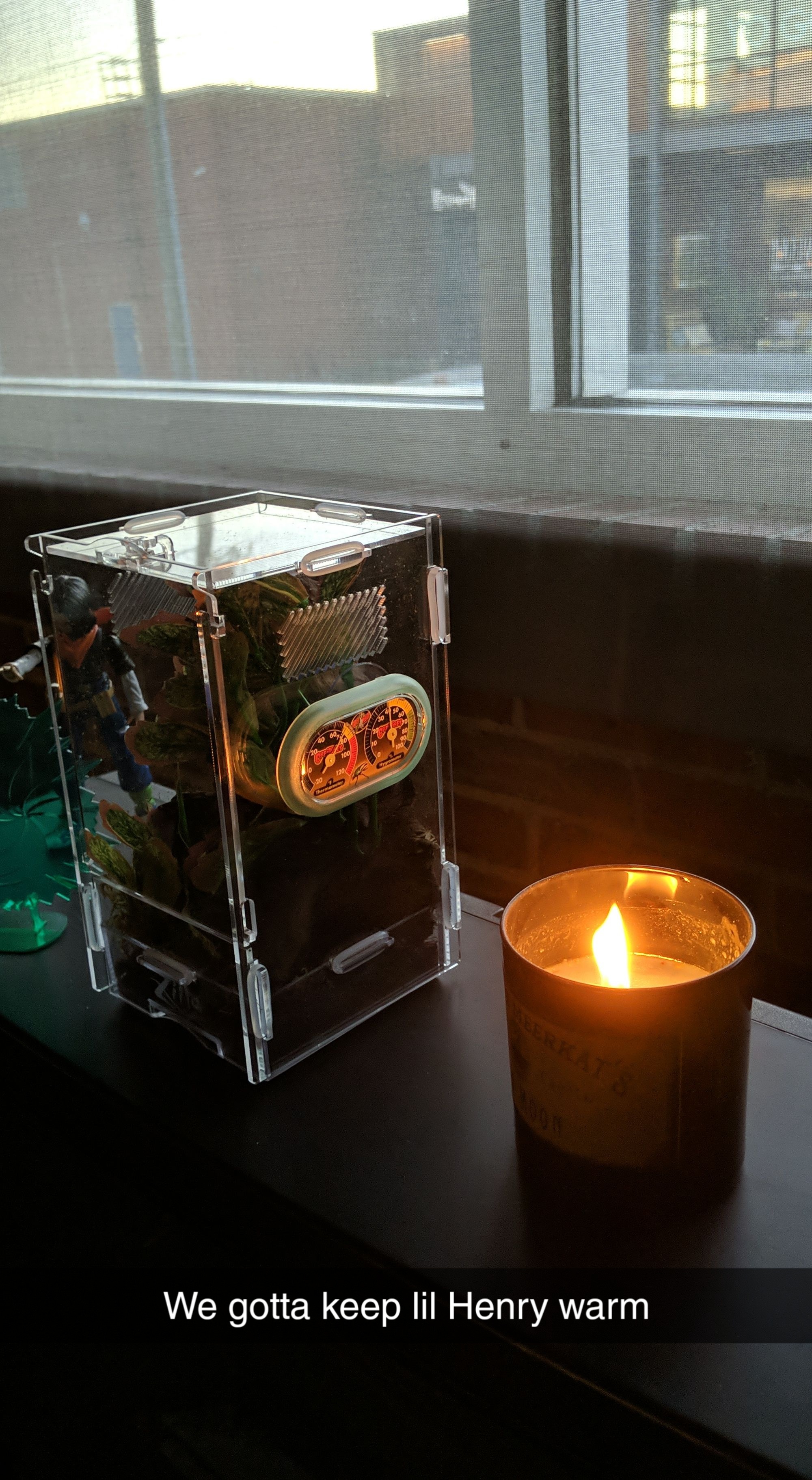 This marks the beginning of my journey as a pet owner of a Phidippus regius. Henry, king of the spiders!

Hopefully this guide will help you on your quest to becoming a jumping spider pet owner as well.

And if not, thanks for joining me on my journey! One that began as a quest to conquer my fears. Jumping spiders make great pets because of how smart they are, they pack a lot of personality and joy in their tiny forms.

It is my hope to one day play chess with Henry. (Stay tuned for developments on that front.)