I left the house during my lunch break today to pick up a rug I had bought from a fellow employee across town. I would stop to pick up some bread on my way home, as well.

I waved to my neighbor pulling in to the apartment complex as I walked to my car. He thanked me for returning his mail to him. He used to live at my apartment before moving next door and I still get his mail sometimes.

I hopped in the car and started the engine. NPR starts playing and I tune in to the story unfolding.

Frank Hartzel is 93, lives outside Philadelphia. These days, sweaters over collared shirts are kind of his thing. 75 years ago though, he didn't have the luxury of a signature look. It was just combat uniforms...

I set my destination in my GPS and pull out of the complex to begin my drive.

After the war, Frank went to Drexel and MIT. He worked his entire civilian life as a structural engineer, making sure buildings were safe. He's sharp, still talks with the precision of a engineer.

I like the idea of being a structural engineer. Very similar to being an architect, which is what my sister, Melissa, is going to school for. There's something about the way "the precision of an engineer" rings true to me that makes me appreciate the story being told.

As I continue to listen, it becomes apparent that this story is about war. But not just war.

In December 1944, during World War II, Nazi soldiers battled for control of the Belgian town of Chenogne during the Battle of the Bulge. Afterwards, dozens of unarmed German prisoners of war were executed. The American soldiers had orders to take no prisoners (opens new window), in direct violation of the Geneva Conventions (opens new window).

I've been watching more movies lately, playing them in the background for ambience as I work from home. Two of them are movies about war. The first, being my new favorite, The King, on Netflix about The Battle of Agincourt in 1415 (also immortalized by Shakespeare in Henry V). The second being 1917, based on fragments of stories from World War 1.

The irony in how war, massive events of death by battle, immortalizes those who fought and died in them is not lost on me.

What's interesting to me isn't so much how history is written by the victors, as it is that remnants of the truth live on despite this. The story I was listening to on NPR was a testiment to that.

For George S. Patton (opens new window), the events described in the Battle of the Bulge are remembered not only as a victory, but as a major achievement for him.

And yet the truth lives on in the soldiers who carried out his orders, in the form of haunting regret. This truth is what is uncovered by the investigative journalist. Although the solider may never be free from the guilt of killing POWs, maybe his burden is alleviated in revealing the truth of what happened.

The Truth Shall Set You Free.

# War as a State Machine

I've been thinking a lot about war and how it's almost always a territory struggle, really. This is made especially clear in the movie, The King.

In the context of Space Pirates, the game I've been working on, it's really a war simulation if territories were squares in space.

Something else I've been interested in very much has been cryptocurrencies and the underlying blockchain technology. I really wanted to combine my two interests into this game.

That's when I realized how I could: the blockchain is essentially an incorruptible, decentralized ledger of the truth. In finance, it's used to keep track of the state of wallets by tracking transactions that modify the wallet balances. This is basically a simple finite-state machine.

Since Satoshi Nakamoto (opens new window) invented the blockchain datastructure, it's now possible to create a record that can not only exist safely in a decentralized form, but can theoretically exist forever (opens new window)

These are very seductive features a game built as a dApp can have. As a gamer, I don't have to fear my game or my progress in the game will be erased when the game shuts down and as a game developer, my game will live on forever!

# The Game of Life

The Game of Life, also known simply as Life, is a cellular automaton devised by the British mathematician John Horton Conway in 1970. It is a zero-player game, meaning that its evolution is determined by its initial state, requiring no further input.

So I decided to build a state machine that simulates the mechanics of the Space Pirates game I want to build. If you are aware, a state machine is a simple concept of a graph of nodes representing states that are linked together by transitions between those states.

I realized you can model the states of a state machine as a database diagram. So I found dbdiagram.io (opens new window), which facilitates the easy creation of database diagrams.

Here is the database diagram I came up with for Space Pirates: 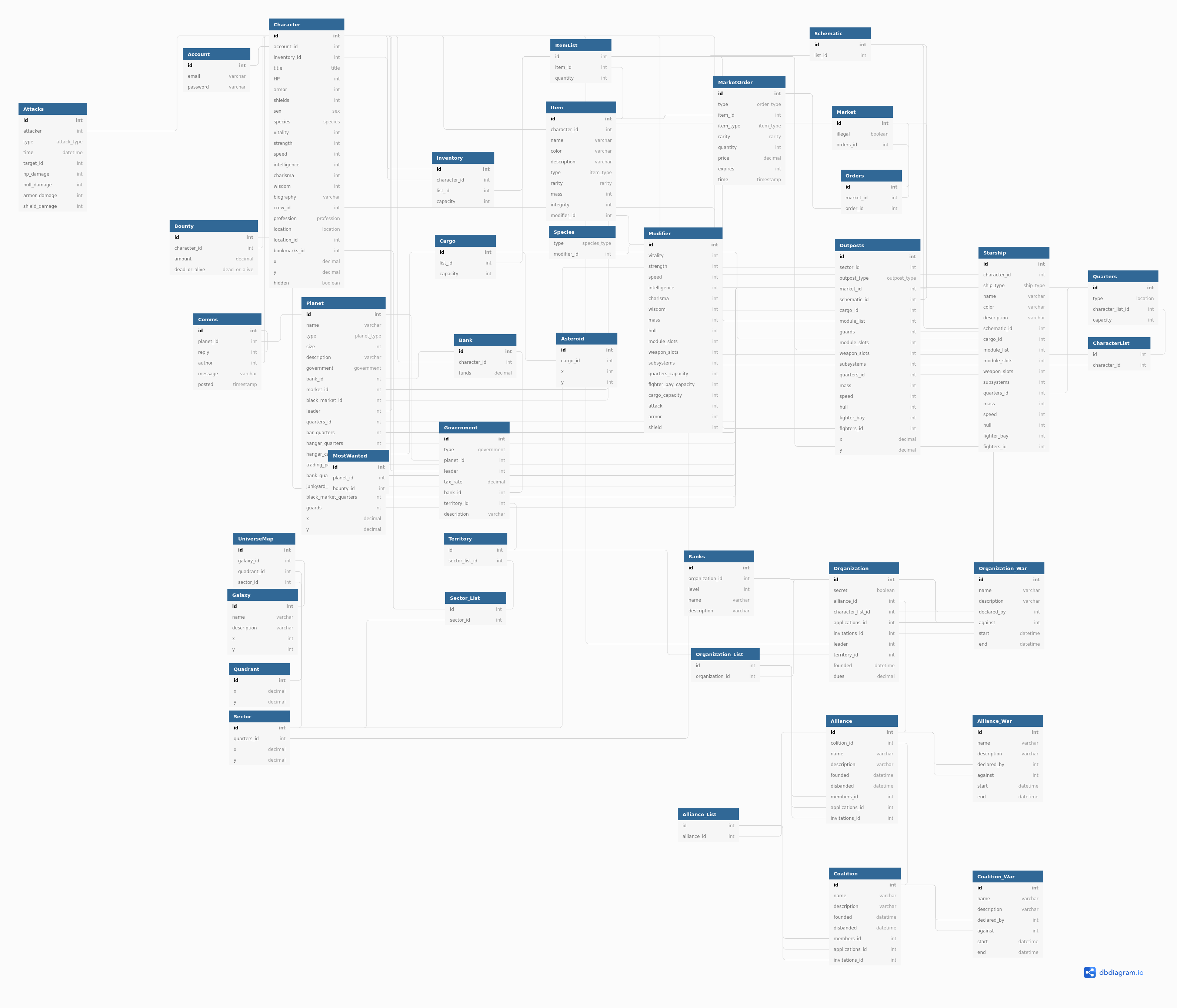 Now, we can start to see how this diagram resembles a state machine. The relations between each table can correspond to an action a player can make that would change the state of game.

I'm pretty proud of this diagram so far. The next step is to determine which blockchain I should use to build my dApp on. So far I'm leaning towards EOSIO, but I haven't ruled out making my own blockchain (opens new window) yet either.