I'm not actually a big fan of the music video, but I feel it's important to include.

Devil Like Me was released by Rainbow Kitten Surprise on November 19, 2013 as part of their Seven + Mary album. 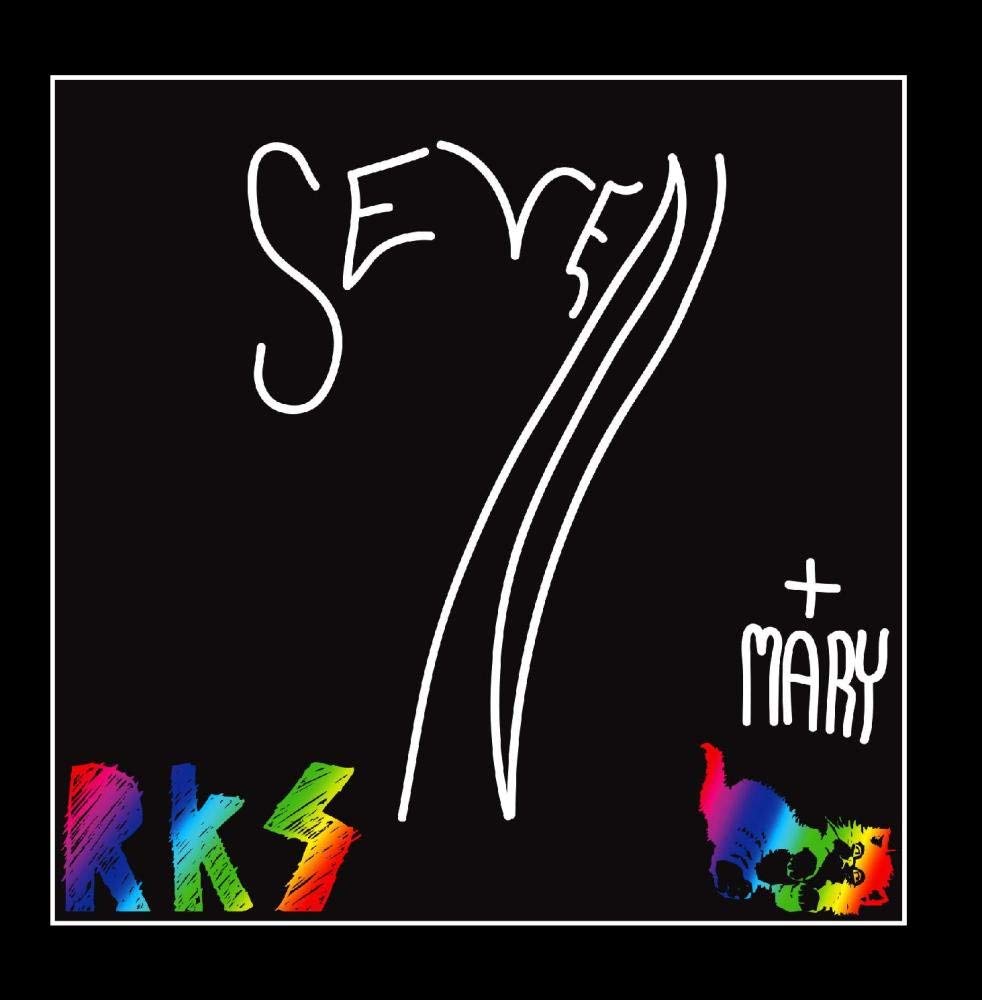 I haven't actually listened to the entire album, but I do like the album art. Rainbows are definitely an aesthetic while tripping, which I most certainly was when I really connected with this song. The melting "Seven" in the shape of a 7 also is reminiscent of the way his vocals sway between falsetto and head voice.

I also really like the white-on-black text of the title. There's something about it that (for me, at least) evokes the imagery of the Virgin Mary (opens new window) with seven children. Perhaps it's because the only context I have for this album is this song that I equate Mary to the "devil's" lover.

Although I don't remember how exactly I discovered this song on Spotify, I added it to my library early 2018 and to my Faking Bright playlist shortly after that.

This playlist has been a favorite of mine and I've played it over many times, although usually Cautious Clay's Cold War is the standout song for me.

It wasn't until years later that I was listening to this song again that it really struck a chord with me. Maybe I wasn't receptive to the lyrics until then, although I've always like the syrupy vocals.

I texted this song to my dad (who is very religious) because it kind of reminded me of him, in the same way that I identify with the pain and sensitivity that the narrator portrays in this song.

My heart and soul were never mine to own

Unlike most religious people, I never found much comfort in the idea of an afterlife. Not only because of how ridiculous the notion seems to me, but because it doesn't seem to follow the way nature seems to work.

One of my best friends gave me the book 365 Tao: Daily Meditations (opens new window) as an adult and it has since had a profound effect on my life. It resonated with me because it confirmed much of the wisdom I saw myself in the patterns of nature. Death is one of those natural patterns. Life continues on, but individuals do not. Their actions may, however, have lasting impressions (opens new window) which ripple throughout time, but I learned it's very hard for things to have any kind of significant (opens new window) lifespan with respect to time (opens new window).

Instead, I find comfort in the fact that we are a part of Life. That we are a significant part of a whole (opens new window). Therefore, I don't think this life is something one can truly own, since it's not something we get to "keep". Indeed, "it was never mine to own".

The best we can do is decide what we stand for, and what we'd die for.

Miss me when you, you wish you weren't right

This surprisingly dense line begins to provide context for the song. I believe it plays on the question:

Is it better to be right, or happy? (opens new window)

This seems to be hinting at the aftermath of a breakup. One in which the narrator (the "devil") seems to believe that his former lover chose to be right, rather than happy; as if she chose to "win" the argument. Thus, she misses him when she wishes she wasn't right.

Shake me all out if I'm wrong, for you, for you

Shake it all out when I'm gone, I, for you

In this painful imagery, the idea of having been with the narrator is now so repulsive to her that she has to physically shake herself off, like dust from a rug, to remove any trace of him.

It reminds me of Kanye's comments about his ex (and how she felt bullied by them) when he claimed he needed to take "30 showers" (opens new window) after his breakup.

How similar, then, must the "devil" feel? Indeed, when considering the devil or demons and the stain they must leave on the soul, how would you rid yourself of one other than by exorcism (opens new window)?

How do you exorcise the devil himself?

Is the devil so bad if he cries in his sleep, while the earth turns

Is the devil so bad if he cries in his sleep? While the rest of the world moves on without him? And why does he cry? Surely because he feels some kind of remorse, sadness, or even scorn.

This is enough for me to warrant my sympathy.

And his kids learn to say, "fuck you", they don't, love you

I texted my dad this song because it reminded me of him. He get's a lot of flak from his kids and he's under the impression they hate him, which I don't think is entirely true. Behind all his faults and flaws, I think he's just as sensitive and misunderstood as the "devil" in this song.

Does the devil get scared if she dies in her dreams

Where the earth burns?

Once again, the narrator humanizes this "villain" by showing that he, too, has fears, especially if anything bad were to happen to his loved one. That's something I think we all can relate to.

He's scared for her because he see's the world is burning (opens new window) and she is the only good thing left in it. Naturally, he fears for her.

She cries too, because she knows she's not like the rest of the world. Indeed, she is unlike anything else in this world.

You see the devil don't mean to be evil