# The Origins of Space Pirates 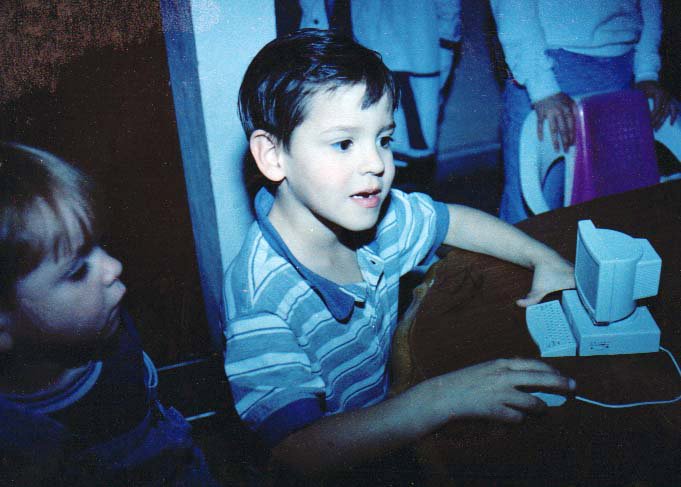 I grew up in the 90s. This meant most of my fond childhood memories were created patiently staring into old computers. You know the kind; those old beige tower PCs. It seems like my dad always had at least two or three lying around, with only one of them ever working.

The internet was a different place back then. Back then, there were more search engines being used than just Google, like Ask Jeeves and Dogpile. Dial-up speeds were slow and so this limited my computer use to learning how to code HTML in notepad and playing any games I could find online that would run on the family PC. Mostly addictinggames.com (opens new window), Flash (opens new window) and Shockwave games. Blades of Exile (opens new window) was one game I could actually run so I spent a lot of time playing it, developing fond memories.

Then I stumbled on a deceptively simple, browser-based game that captured my imagination... 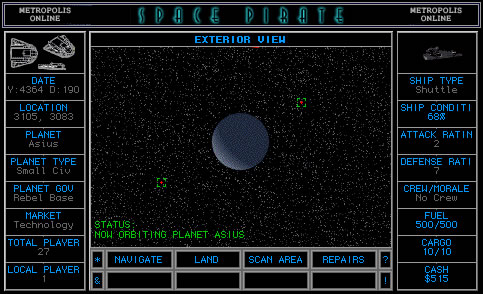 SpacePirate.com (opens new window) was a browser-based space trading & combat MMORPG created in 1995. It was created using Shockwave and at the time, it was one of the best examples of how complex a game you could create using the technology. Version 2 of it included multiplayer chat which was a big deal at the time.

At one point, I vaguely remember accessing some beta part of the website and chatting with who I think was the developer at the time. I remember asking something along the lines of how many planets in the game there were: something like thousands. As a kid, I didn't fully understand the power of computers still and my mind was blown away at this seemingly large number. I was star-struck at the promise of endless space-fairing adventure this game seemed to offer.

Eventually, the game was scooped up by another company. They ran with it for a few more years with a couple updates before shutting it down, most likely after the 2001 dot-com bubble burst.

Thus, Space Pirate faded from memory and grew deeply nestled in nostalgia. As I grew older and started learning about game development myself, I realized I wanted nothing more than to play this game again, even if it meant I had to re-create it myself.

With it being so nestled in nostalgia and very little left in memory, I had to really search the archives of the internet to gather what information I could of it. Apparently I wasn't the only one (opens new window) on the same quest.

Luckily, the wayback machine (opens new window) offered a glimpse into the past where I found the remains of my beloved game. I emailed the creator of the game to see if he could shed some light on the history of Space Pirate for my research and fortunately he responded. He even had similar inquiries, which prompted him to make a mobile version (opens new window) of the game for iOS.

The premise of the game was as follows:

It is so far in the future that no one even knows where "Earth" is anymore. The galaxy is pretty much controlled by the Galactic Empire, a large bureaucratic government ruling over most of the planets toward the center of the galaxy. At the ends of the galaxy are collections of "independent" planets that have their own governments.

The real force between the stars is the dreaded Intergalactic Revenue Service (IRS). This is the organization that collects trade tariffs throughout the galaxy. Although the taxes go to the Empire, they collect taxes on "independent" planets as well. Only the few planets that are part of the rebellion do not pay taxes. Because of the IRS, a law-abiding trader can barely get by. Therefore, Imperial freighters, exempt from tariffs, have a virtual monopoly on trade. This is, of course, except for the Space Pirates.

Space Pirates trade without paying taxes. They ignore the IRS agents at every space port and risk the wrath of IRS "Tax Collector" warships.

The rewards of being a Space Pirate are many: fame, fortune and freedom. However, the risks are high as the Empire and the IRS consider tax evaders to be "scum" and not worth dealing with. Therefore, the IRS warships are under orders to attack and destroy pirates immediately upon contact.

As a Space Pirate, you will have to keep up a ship and crew. Ships need fuel and repair, and your crew needs paychecks. Let your crew's morale fall too low and you could be looking at a mutiny.

Space Pirates also get to do fun things like raid other ships and plunder the natural resources of uninhabited planets. There's also drinking and merriment to be had at every spaceport bar from one end of the galaxy to the other.

There was also some more lore to the storyline, which can be found here (opens new window).

The general mechanics (opens new window) of the game were simple. You are a space pirate. You travel between planets going on missions, trading goods, plundering, avoiding the evil empire and most importantly, building your crew and ship.

All I remember of my playthroughs of the game were the ambient sounds of the bar as I looked to hire crew members. You could buy a round of drinks for everyone, presumeably to make characters more agreeable to joining your crew.

I always remember being suprised at how quickly my crew would mutiny due to not paying them enough. This was how I met the Game Over screen most of the times. Despite this, it remains one of my favorite aspects of the game. It was enough at the time for my imagination to give these crew members (who were really just stats on my ship) the personalities I would expect of a rebellious crew of space pirates.

This was the charm of the game. It's simplistic and static layout left much of the adventure and fun of the game up to your imagination.

However, the nostalgia goggles didn't help much in the way of remembering much of details of the mechanics of the game. Seeing as I wanted to recreate this game, I needed to dig deeper to sink my teeth on something more concrete to base my game mechanics off of.

So I came across this beginner's guide (opens new window), which provided a deeper level of insight into the mechanics of the game.

Spurred by bouts of nostalgia over time, I continued my research, digging a little deeper each time and accumulating more and more data about the game I knew I would recreate one day.

Then one day I stumbled on the closest thing I could find to a working version of the game. 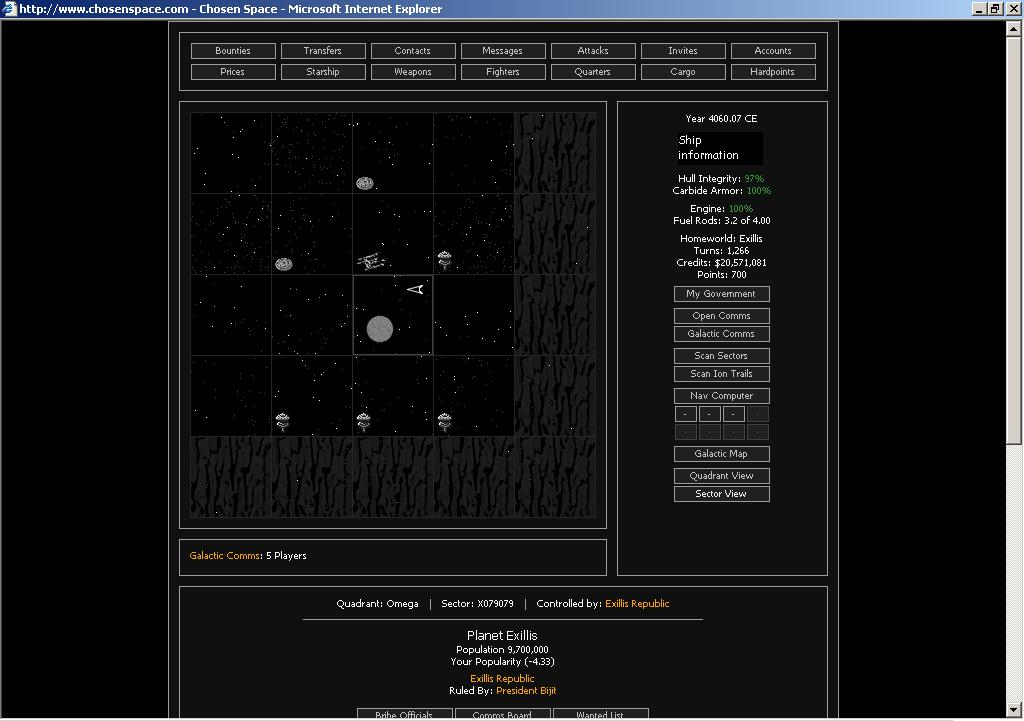 Surprisingly, there were very few games similar to Space Pirates; a browser-based space trading MMORPG. The closest thing to Space Pirates out there was EVE Online (opens new window), which was a 3D version of the game but contained many of the same elements that made Space Pirates enjoyable, namely a sandbox environment with a free market economy.

This is probably how I stumbled upon a game called Chosen Space (opens new window) during my research.

It was beautiful. It was almost exactly the same game as Space Pirate, only more fully featured. It allowed you to build components for ships, take up bounties on other players and even play intergalactic politics by ruling over planets. As a ruler, you could impose your own taxes, form allegiances and post your own bounties. Being a bounty hunter was cool as well because you could actually track down players based on lingering ion trails (opens new window) their jumps would leave behind. Hunting became more of a sport as ships could equip scramblers to leave behind false trails to throw trackers off.

Overall, Chosen Space seemed to improve upon one key aspect that Space Pirates never really capitalized on. Something that created loyal fans, dynamic gameplay, and a rich history.

Because the game naturally fosters strong community relationships through gameplay, the forums were active and there were many great contributions to the wiki. Players were encouraged to create biographies (opens new window) for their characters, and there was even a forum dedicated to roleplaying (opens new window) your character!

Like myself, I found others who went on nostalgic spirit quests to find their long lost game. Some of these pilgrims even formed small communities (opens new window). Still others (opens new window) who stumbled on Chosen Space stayed because of the community.

Now these games exist as fond memories, leaving behind only artifacts of their existence.

The Chosen Space wiki pages provide a holistic picture of how the game worked and will be very valuable in creating the mechanics for a new Space Pirates game.

At long last, it is finally time to create Space Pirates, the spiritual successor to Space Pirate.

I've switched between staying true to the original and creating a browser game powered by modern technology or going the longer route and developing a custom 3D game engine in the style of Dark Forces II (opens new window). 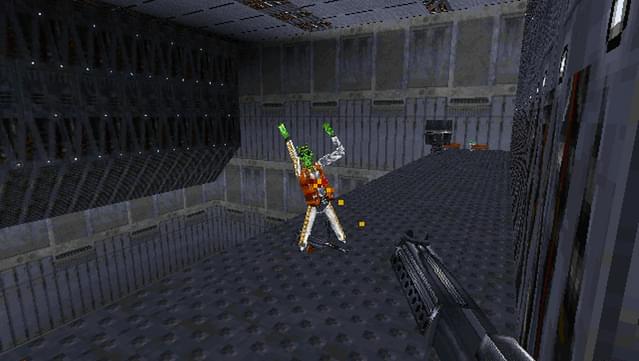 I even started to reach out to an artist (opens new window) to begin collaborating on the game, but unfortunately I think I did so a little too early in the development process. I credit him with introducing me to the BLAME! (opens new window) manga and Devil Daggers (opens new window), both of which I find inspiring as an art style.

Most likely, tho, Space Pirates will be a browser based game; similar to Space Pirate and Chosen Space, but built on a modern web stack. I want the game to be freely available on the web using technology that won't be obsolete in a decade. Hopefully one day, this game can inspire others like I've been inspired (opens new window).

Now that I feel I've collected sufficient information to begin outlining the game design, I hope to make significant progress on this project in 2021. I've graduated college, started a new job and have finally settled in after moving. Especially now that I'm working from home during quarantine, I should have plenty of time to dedicate to hard development.

As development begins, I'm hoping to corner the #spacepirates (opens new window) hashtag to foster a community for all my fellow nostalgia pilgrims.