Note: This article was imported from my old blog, christoferpadilla.tumblr.com. 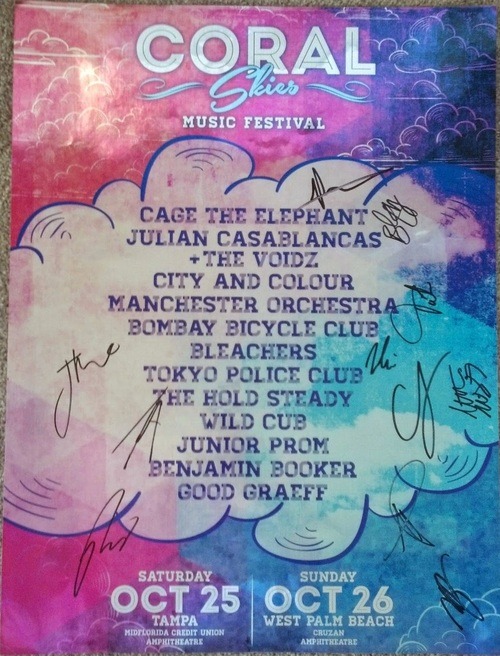 So yesterday I had the wonderful opportunity to see some amazing bands play at the Coral Skies music festival in Tampa.

I'd first heard of the festival a few months ago from my sister. At the time all the bands but Manchester Orchestra were announced for the lineup, but I was still impressed with all the good bands that'd be there. When I saw Coral Skies tweet that they'd added Manchester Orchestra, that just made it even more exciting.

My siblings: Adam, Eric, Carlos, Meli and I, left Orlando around nine and drove about an hour and a half to Tampa. We got all hyped up on the way there as we listened to the CD Meli had burned. It had a lot of the bands' music we were going to see.

This was my second time coming to the Midflorida Credit Union Amphitheater, and my second music festival. I came here before for my first music festival, Big Guava. This time they only had two stages: the main one (Scion Stage) and one of the side ones (Sunrise Stage). Throughout the day we'd go back and forth between them for each show. It wouldn't have been too bad if there was a little more to do between shows besides getting food finding a good seat for the next show. Big Guava had a lot of carnival rides you could go on during the festival.

As soon as the gates opened and we got in, we checked out the merch tents and ogled all the cool band tees. Behind the tent was a line for the band signing table where Bombay Bicycle Club was already signing posters. In order to get in line for it, you had to purchase a poster, cd or whatever so you could get a ticket for the band you wanted to have sign your goods. Well I didn't know that, so by the time I got my poster, the Cage The Elephant and Bombay Bicycle Club tickets had already been taken, so I got aManchester Orchestra ticket for later on in the evening.

Good Graeff was the first band that played on the Sunrise stage and they were really good! I'd never heard of them before but you can bet your buns I'll be listening to them now. Wild Cub and Tokyo Police Club also played on that stage and they were both equally good. I recognized a lot of the songs we listened to in the car ride over when they played them, too.

There was plenty of food trucks to choose from and we got some really good nachos from Street Surfer that we all shared. I got to see a little bit of Bleachers before I left to get in line to get my poster signed.

While I was waiting, I asked one of the security staff members if it was possible to get at the end of the line for one of the other bands signing if we didn't have their ticket. He said if it got too deep, they'd have to cap it off, but otherwise I could try.

I got to the line pretty early so I was close to the front and was able to grab a picture with Andy before they started enforcing the "no-selfies" rule. I also nerded out and told him how big a fan I was of the band and that it was my third time seeing them live. 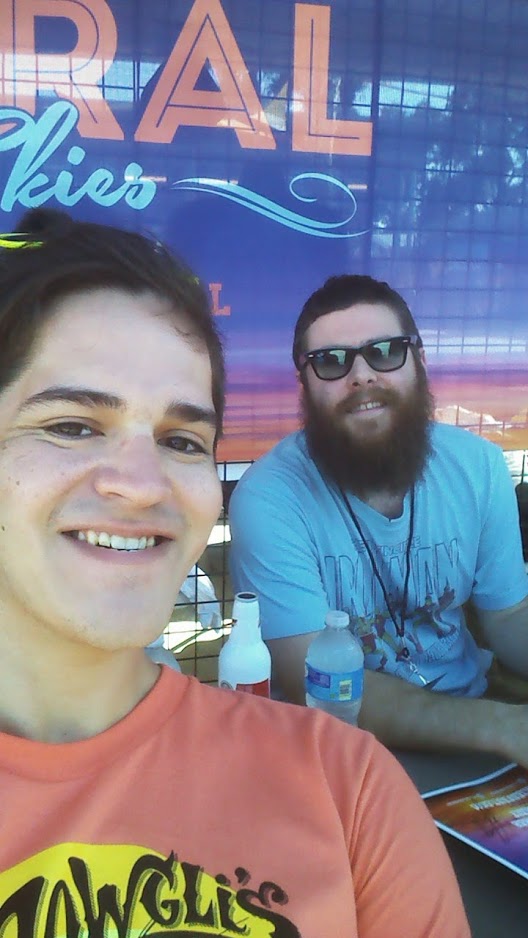 I missed the Bleachers' finale, but I could hear it even from the line I was in, and it sounded really good. I wasn't prepared for how amazing City And Colour would be! THEY WERE AMAZING!

There was a lady behind me that kept telling "Chris" to stand up because apparently they'd traveled over two hundred miles to see them. She was also getting mad that people were just talking while they were playing. To be fair though, we were all in the general admission seats and not in the pit. It was unfortunate that our seats for the Bombay Bicycle Club show were a little far from the stage. We probably could have gone into the pit, but I enjoyed the performance from where I sat regardless.

We got some funnel cake and spent a little bit of time chilling on the lawn seating. Manchester Orchestra played later at the Sunrise Stage. They were just as epic as they always are and I'm glad two of my brothers got to see them for the first time. I left before they finished so I could hopefully get my poster signed by Cage The Elephant.

I got to the end of the line and after a few more people got behind me they capped it off. Needless to say I was feeling pretty happy that I'd be able to finally meet the band. Once I got to the front of the line, I asked them if they were still friends with Morning Teleportation and if they were still coming out with music. I'd first heard of Morning Teleportation when Cage The Elephant posted their friend's new music video (opens new window) on their facebook page. I instantly fell in love with the band and actually went and saw them as my first concert.

He said they were still coming out with music and that I should look for it sometime next year! I was pretty stoked. When I reached the end of the table where Matt was signing, I told him that this was my second time seeing them play and how out of all the bands I've seen play, they had the best live performance. Matt thanked me and said he hoped they'd be just as good tonight.

We got some funnel cake before the last two shows. In my humble opinion, adding Julian Casablancas + The Voidz to the lineup was a mistake. It really didn't fit with the theme Coral Skies had presented so far, and their performance was probably the worst one that day. My brother and I went up to the lawn to watch from their because it was just way too noisy to listen to from where we were seated.

Fortunately as soon as Cage The Elephant came on stage, he said "fuck that shit" and made everybody move up. We managed to make it to the seats that were right behind the pit and that's where we jammed all night.

He started off things right with "Spiderhead" and every song he played sounded like it was the encore song. At one point he did try to crowd surf, but the pit sucked and they couldn't even keep him up. I felt like he was off his game since there were some shrill parts of a couple of songs he had to rely on the backtrack to sing for him. I'm guessing it's because touring with a setlist like theirs with as much energy as he puts into it can quickly tire him out.

Despite that, it was still the best show that night. I had a blast rocking out and jumping around even if it was in the seats. I enjoyed every minute of Cage The Elephant's show and sang along with all of my favorite songs by them (which was all of them). By the time they finished their encore with "Shake Me Down", I was exhausted. I had spent the whole day listening to great music and hanging out with the people I love. I killed my voice and I was pretty sure I needed medical attention after how hard I was jamming, but considering everything I got from Coral Skies, I can easily say it was all worth it.