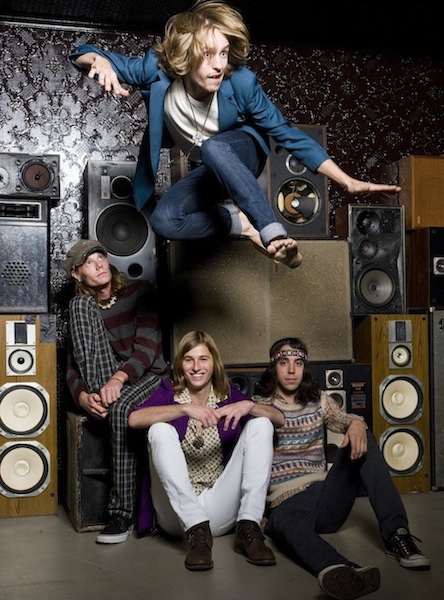 The show tonight at Backbooth was simply amazing. I think this was definitely one of the best nights of my life. I had originally planned on just going by myself, since I didn't think anyone else I knew would be interested in going. As it turned out, I was wrong, and my sister Christina, Adam, my brother, and my friend Mikey and Dougie came with me (although it was later discovered that Mikey had never listened to the band beforehand).

When we got there, there was a small line with an equally small wait, with the only unusual incident being a joke from a homeless man, which turned out to be less of a joke and more of a plea for "donations". There was a small poster that advertised Morning Teleportation playing that night and when I paid for my ticket and asked if I could keep it, I was told it was fine as long as it was still there.

The venue was really nice; there was the bar in the front, and then in the other room a nice venue with a bar seating and even a balcony. I opted to stand in between to be closer to the stage. We ended up waiting an hour before the first band played, Coyote Theory. In the mean time, I bought a Morning Teleportation shirt, which Paul sold to me personally. They were just chillin' with us before the show and I got to meet them and get them all to sign my shirt, which made my evening. I was also really surprised at how quite Tiger's voice was. I guessed he must have been saving it for the show.

When Coyote Theory finally played, it turned out to be pretty good. The bassist in particular caught my attention because of his obvious talent. He switched off halfway to play the drums and then the guitar. The band was local, and it turned out that most of the people who came to the show showed up for them as the room was promptly reduced by half once they finished.

After them, Nicos Gun played. Nicos Gun had been touring with Morning Teleportation for the lat three weeks, and they were really good. Me and Dougie were really close to the stage, so to be honest, it was so loud I don't think I accurately heard what they sounded like. Still, I felt like they were awesome, and apparently they were. The lead guitarist/singer was shredding on his guitar during an awesome solo, and at one point he dropped his pick. It landed right in front of me, and when I picked it up to give it to him, I saw that he had already procured another one and let me keep it. Pretty dang cool. Afterward, we met with him as he was walking around and he talked about what it was like touring, coming from Philadelphia. He was surprised at the layout of Orlando, but we explained that he was in the downtown area and that there was no residential area there. He said it was a lot like Chicago.

Finally came the moment I had been waiting for; Morning Teleportation. They were awesome. Having already met with them, it was amazing to see them perform, knowing them as people and from listening to their studio sound. It was pretty cool to have them play a song that I recognized form listening to a thousand times. Most of the people in the audience were singing along to the lyrics and jamming to the music. When they finished we had to leave pretty quickly, since our parking ticket had expired half an hour ago and Mikey was afraid he'd get a ticket. On our way out, we got one last chat with the drummer of the band. I also grabbed the poster out front.

Coming home, smelling like smoke and beer, pick in my pocket and poster in hand, I felt exhausted from the whole experience. For the first live show I'd ever been to, it was pretty damn good.